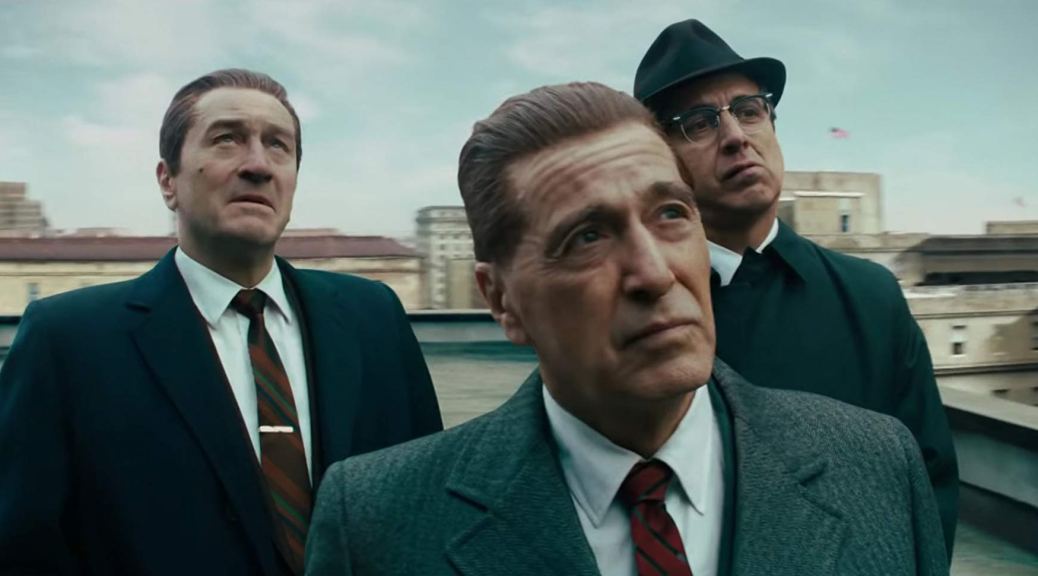 It took me no less than three attempts split across four separate viewing sessions (and between several other movies) to get through The Irishman, Martin Scorsese’s three-and-a-half hour ode to the mobster movie and, in many respects, his own career. Though really more of a mini-series than a movie and too long, it’s a knockout reflection of four geezers at the height of their power in front of and behind the camera.

Robert DeNiro, Joe Pesci, and Al Pacino are seamlessly de-aged throughout a five decade span as real life mafiosos Frank “Irish” Sheeran, Russell Bufalino, and Jimmy Hoffa, three big bosses of the East coast who’d touch the shape of American history from their pervasively shady under-the-counter political dealings. All alone in a nursing home, Sheeran recounts his time as a hitman for the Bufalino crime family. Rising through the ranks of Philadelphia’s underground, a young Sheeran befriends the Bufalino mob and their associate Jimmy Hoffa, tailing the political whirlwinds of mafia life through the back half of the twentieth century.

Spearheaded by Scorsese’s masterfully beautiful marriage of all parts of cinema, most notably music, tableaued slow motion, and ramming narrative pacing, the holy rectangle of Italian-American auteurs do excellent work, though, apart from Pesci’s unexpectedly mellow new turn, stick pretty closely to their usual patented schticks. DeNiro delivers a phenomenal framing monologue running across the majority of the film, doing most of his acting in quiet observation and letting Steve Zaillian’s breezy, colorfully dark screenplay do most of the work for him. It’s a cooled-off performance departing from his recent cartoonish filmography and lets the character of Frank really run through him to life.

The slow, progressive cracking of the relationships binding them, the almost sociopathic incompatibility between his and the “family’s” businesses and domestic life, it’s really something, and brilliantly crafted on a filmic and reflective meta level on the part of Scorsese. The Irishman isn’t self-indulgent, but it works on layers upon layers as its own piece and even more as a pensive meditation on the specific contributions and winding themes the director has built over decades in the gangster genre. 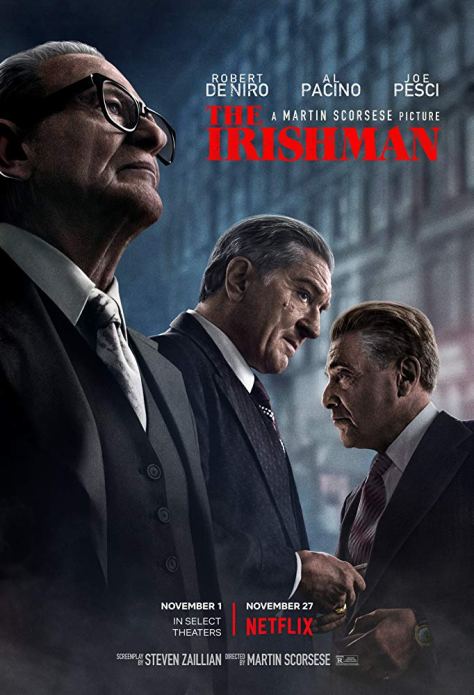 Meanwhile, Pacino’s explosive tempers pull a fun contrast to the otherwise simmering nature of the film, sporadically injecting good doses of incendiary power to the long-running fuses carrying it forward. Because as propulsive the pacing Scorsese’s momentum-driven directing launches at, the story itself is composed of digressive side plots densely crammed with details and characters, lending the film more of a slow-burn structure that doesn’t start to pay off until the two hour mark. In fact, a few characters and plots get lost in the mix as a result of the sheer amount of material, at least relative to a piece touting itself as a movie.

There’s no shame in experiencing the film in chunks, though that notably does end up taking away from Scorsese’s vision and the experience as a whole, particularly regarding the heavily detailed world and plots. No shade there because the material is thoroughly engrossing and, again, the performances and directing are nothing short of great, but really, the film did not have to be as long as it is to achieve what it does so well.

Long, dense, but completely excellent all the way through, Scorsese’s mobster epic The Irishman will test the patience and schedules of many for all its worth. And that’s a lot.