After Disney’s live action remake (reimagining? sequel? reboot?) of Alice in Wonderland back in 2010, I remember jokingly saying I couldn’t wait for them to adapt the stylized, prohibitively cartoony proportions and musical sequences of The Lion King into realistic grittiness eventually. This gag of mine carried on throughout the years every time another live action adaptation of a classic Disney animation sprung up, and though it seemed like a ridiculous prospect and impossibility as the quip got repeated over and over, it seems like the studio finally backed itself into a corner and went ahead and carried through with my bad joke, anyway.

Like most of its other (ahem) live action adaptations, this Lion King follows the same plotline of the 1994 original, which, depending on who you ask, coincidentally follows the same story of Kimba the White Lion, a 50’s manga and 60’s anime series, or Shakespeare’s Hamlet. Simba, a young lion and heir to the lands of Pride Rock, is exiled after his father, Mufasa, is betrayed by his envious uncle, Scar, setting the kingdom in peril from its negligent dictator’s new rule. A few cut, added, or tweaked scenes aside, the film is, verbatim, the exact same thing as before, just—and I know this’ll sound like a broken record when talking about this damn studio trend making these adaptations right now—significantly worse in all regards.

Favreau has proven himself time and time again a great director, but this film is totally soulless. There’s no zeal or artistry at play here, just the same film as before being churned out in a shiny (but also less shiny) new way, practically shot for shot. Though it tells the same story as before, this Lion King perceives more like it’s only acting the original out again, a copy of a copy (which doesn’t even have the best narrative pacing in the first place), never actually feeling like the plot or narrative is telling a real, living, breathing story.

That’s definitely in large part to the fact that, in converting the mildly anthropomorphized animals of the cartoon into photo-real animation, practically everything giving the original its beloved flavor is lost. The animals and vistas look incredible and mostly wouldn’t look out of place in a nature documentary, but that works out like a brutally cutting double-edged sword that strips the film of all it’s worth. Despite being entirely CGI creations, the visuals lean in all the way to look true to life, grounded, and tangible, boasting practically real, living creatures, but the film looks all the more drab for it. All the best things about The Lion King, namely the bright, gorgeous palettes and tableaus that can only be made in stylized cartoon worlds, are gone in favor of the magicless, walking, awkwardly talking animals and visuals inhabiting the screen. 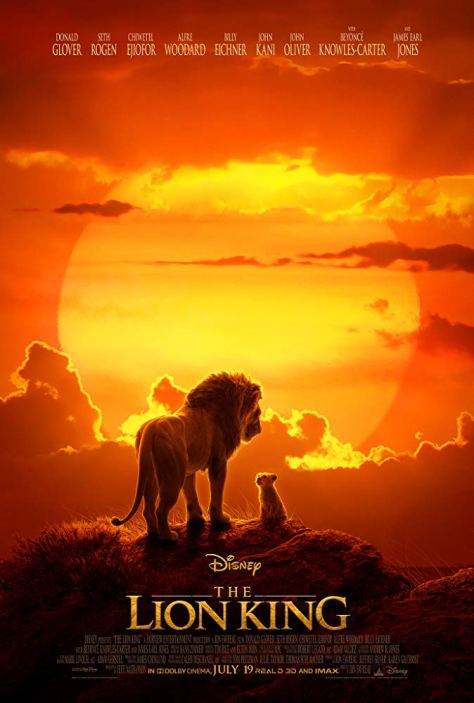 Incidentally, all the characters are completely blocked from physically, most notably facially, emoting. Most animals, especially the stalwart, stoic lion, obviously can’t hold a mouse between their paws like a human, jump around, or dance, but the real nail in the coffin comes from the fact that they also sadly can’t convey much, if any, personality or expression in their faces. It’s so, so jarring seeing Simba, Mufasa, and Scar barely move their faces during dialogue-heavy conversations; it’s like watching one of those cheap kids’ shows or movies where a real animal is made to talk by very obviously giving voiceover in post. The film’s got the naturalistic look, but is everything but.

It’s hard to tell if the voicework is any good as a result, but it’s still very clearly inferior to the original. Theoretically, everyone from Donald Glover, Beyoncé, Seth Rogen, Billy Eichner, John Oliver, Keegan-Michael Key, Eric Andre, Alfre Woodard, and a returning James Earl Jones is cast to the tee. There’s little of note to discern from the hyped cast’s performances, though, which all ultimately turn out as replaceable, forgettable whispers in uncannily real (but not) talking animals’ mouths.

Chiwetel Ejiofor at least stands out the most as the new voice of Scar. Ejiofor’s timbre carries itself with much more menacing tones and, on its own, would be a solid tick on any resume. Unfortunately, it’s also pretty one note, and it never hits the many peaks of Jeremy Irons’ deliciously sadistic work from the original. As you can guess, Tim Rice and Elton John’s music is also substantially worse in comparison.

The engineering feats of 2019’s The Lion King are breathtaking, but in the end, this wholly inferior remake is nothing more than an impressive technical exercise and flex on Disney’s corporate behalf.