Is Endgame the best Avengers movie? The best Marvel movie, even? Does it pay off eleven years of revolutionary filmmaking, dozens of hours of material, and many, many characters and their respective arcs? Why are you reading this? Go see for yourself!

Or don’t. You do you. No spoilers ahead.

In case it wasn’t already obvious enough, this is a film that absolutely demands one’s devotion to being caught up on most, if not all the entries preceding it. If the names Tony Stark (Robert Downey Jr.), Steve Rogers (Chris Evans), Bruce Banner (Mark Ruffalo), Thor (Chris Hemsworth), Natasha Romanoff (Scarlett Johansson), Clint Barton (Jeremy Renner), James Rhodes (Don Cheadle), Scott Lang (Paul Rudd), Carol Danvers (Brie Larson), Nebula (Karen Gillan), Rocket Raccoon (Bradley Cooper), Thanos (Josh Brolin), or any of their respective monikers mean anything to you, rest easy, because Avengers: Endgame is jam-packed with second after second after second of fulfilling material to eat your heart out to.

Expect the unexpected, and unexpect the expected as the pair of a pair of a generation, writers Christopher Markus and Stephen McFeely and directors Anthony and Joe Russo, throw just about everything—EVERYTHING!—at the wall. It all pretty much sticks, and cleanly, at that. All the pieces, down to the film’s driving narrative forces, feel well thought-out within the logic devised by its world and characters. 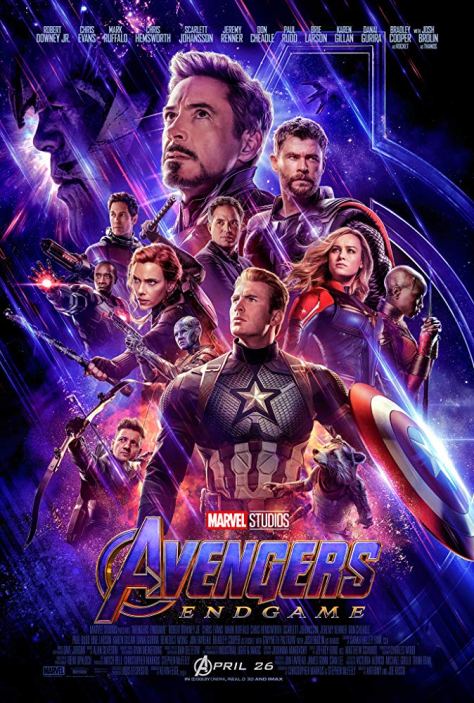 Wisely holding off on the action until they need to, McFeely, Markus, and the Russo brothers exhibit a masterful control of tone and narrative that near flawlessly crescendos into an impossibly impressive finale paying off many of the hundreds of character beats in the twenty-one films before it. It’s funny, exciting, emotional, even breath-taking from how far the filmmakers push the film into uncharted territories of the superhero genre. Heck, Endgame even slightly redeems some of the low points of previous entries—including frustrating characters and moments from Infinity War and Captain Marvel, to name a few—by offering up another round for their redemption, however brief they may be.

But maybe the most admirable thing about the film is its near perfect accomplishment at wrapping up the Infinity Saga in its entirety. Characters and storylines are laid to rest in more ways than one, while new doors are opened for others in gratifying exchanges that won’t soon be forgotten. Whether Endgame is a poetic conclusion to the Marvel Cinematic Universe or just the beginning of a new chapter of it for you, the film is an incredibly satisfying resolution to a legacy spanning a decade’s worth of content, and beyond.

Will there be things for people to nitpick? Sure. Are there some crucial, almost defining character decisions and story elements fans and casual viewers will scoff, fume, and gripe at until the end of time? Oh, most definitely. But Marvel has never been about cynicism or laying out infallible, world-weary stories. They’ve always been about positivity, humanity, and, above all, hope, and this film does more than right by that sentiment.

Avengers: Endgame is likely the most comic book movie ever made, maybe even the most movie movie of the twenty-first century so far. A true cinematic achievement, the film outdoes itself as a tender look back at eleven unforgettable years of film, as well as a look forward at many more to come.

2 thoughts on “The end of the beginning – ‘Avengers: Endgame’ Review”